Foto Tip by Mark Alberhasky – Mark explores the benefits of getting immersed over your head in some way and about discovering a lot about yourself in the process.
If you’re like me, you’ve suddenly noticed the days are shorter and fall is on the way.  While I can honestly ask, “Where did the summer go?”, the answer is it flew by while I was doing a heck of a lot of traveling.  I just returned from nearly 3 weeks in Tibet, so I have vivid memories that account for a substantial block of that missing summer.  During my 30 hours of travel time back from Asia, I had ample time to give some thought to a theme for my next photo tip.  Actually the tip tip came in the first hour on the plane … passing the next 29 was the challenging part! 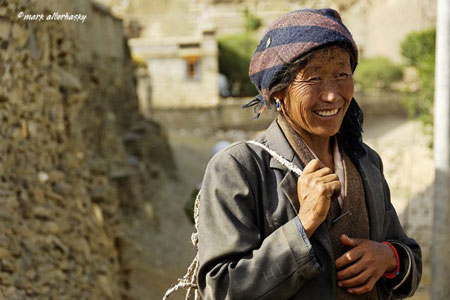 If you’re really serious about making progress with your photography ( or other passion), take on a project in which you:

Get In Over Your Head.

For example, immerse yourself in a totally unique situation, say half way around the world, where you don’t speak the language, your body thinks it is midnight at noon, and every meal is an adventure where you hope to be able to find something to eat!  Then when you come up for air (of course at an average elevation of 13,000 feet, there is only half of what you’re used to breathing), spend every other waking moment with a camera in your hands, looking for the next great shot.  If it doesn’t sound easy to you, let me confess up front, it wasn’t.  On the other hand, it was rewarding in ways I would not have imagined.

You’ll learn a lot about yourself.
Most of us aren’t even beginning to push our envelopes in the routines we go through on a daily basis.  Going to most of the places we travel for vacations, while entertaining, are often just variations on the themes we live at home.  I’m not saying that Tibet was a question of actual survival, but the stresses involved were certainly real, both physical and mental.  Yet I discovered I could deal with it and still stayed focused on my surroundings, finding memorable images at nearly every destination (maybe it had something to do with being blessed my that Lama at a temple in the Yapsung Valley).
You’ll learn a lot about other people.
I traveled with another photographer; she was not my wife.
We had known each other casually for several years but never spent extended time together.  Now we know each other quite well, and we’re still friends!
My wife and I were apart for the longest period, nearly a month, in the 35 years we’ve been together.  While we are VERY happy to be back with each other, we both surprised ourselves in finding that we could still be individuals, outside our identity as a couple after so long.  Believe it or not that is an important thing to actually grasp.

But one of the most surprising things came from a new trick I decided I would try on this trip.  It’s not original, but rarely practiced by photographers in the field.  Many times when photographing people in other countries, promises are made to send back pictures.  Although I have followed through on occasion, like all photographers there have been times my good intentions slipped through the cracks.  I had heard of another photographer taking a small, battery operated, ink jet printer in the field with them and printing portraits on the spot.  I got a small Hewlett-Packard printer and made space in my luggage.  Our first day in rural Tibet, we had paused below a mountain palace for a shot.  As fair skinned westerners are exceptional there, we naturally drew attention from the Tibetans coming by on foot.  They were at first hesitant to have their picture taken, but were intrigued to see themselves on the LCD on the backs of our cameras.  Between the excitement of first pictures and thin air, I still remembered the printer in the jeep.  If you think the locals were fascinated by the LCD images, imagine their excitement when this small box began buzzing and shaking and out popped a vivid 4×6″ print of their portrait.  I was not prepared for the emotional response that this relatively simple act brought forth, virtually every time we brought the printer out.  While I know I will never forget many of the nameless faces I met, I also know they will never forget the day the fair skinned photographer met them in the field, and left them with a picture.  The attached image is one of my favorite portraits, and I think will give you an inkling of the warmth we so often found in people with whom we seemingly had so little in common.

So if you want to grow, go way past the point where you can turn around and come back home.

Practice your passion outside your comfort zone, and fly by the seat of your pants.

After all, you never really learn to swim until you get in over your head.

PS … Here is the link to all the images from Tibet.
Enjoy!