Byte Magazine Was One That Shaped An Industry

I was introduced to Byte magazine in 1978 by one of my tutors at university. It was a very core part of my life for the next 20 years.

Byte was a magazine focused on microcomputers, though it did also cover other interesting developments in the world of computing. Its first issue was September 1975. Back in those days personal computing required electronics skills, as well as the ability to program in machine code and assembly language. So the magazine had a lot of how to articles – building computers, accessories, writing code and reviews of the very early personal computers (some of which were in kit form).

One of my tutors, Mike Bauer, introduced me to Byte in 1978 when I was a second year undergrad computer science student. I became an avid reader immediately. Byte embodied the maker, problem solving and do it yourself ethos of the early microcomputer industry and I loved it. 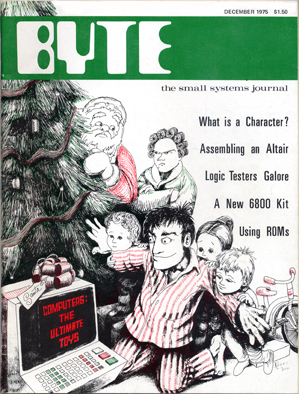 My first published article was printed in Byte in 1980. It was about adding a full sized keyboard to an English personal computer called the Sinclair ZX80. That was the first money I ever earned from writing and started me on freelance magazine writing.

Byte was part of my life for so many years. I eagerly awaited each new issue and the reading of many books was interrupted by such an arrival. The two times I tried reading Lord of the Rings, a new issue arrived when I was lost in the mountains of Mordor in the middle book and I never finished. Byte was more attractive.

In the early 80’s I would buy Byte in my local newsagent. I went in one day when a new issue should have been there and there was no copy. I went to the counter and asked the girl “excuse me, but has a new issue of Byte magazine come in?” Her reply had me laughing my head off “Have you tried looking in the sealed section down the back?” This story had many a class of computer science students laughing for many years to come. I guess if you didn’t know Byte sounded like some sort of S&M magazine.

Byte ceased publishing in July 1998. By that time I had almost every issue and they took up a lot of bookshelf space. I eventually sold the whole collection and did quite well on it.

No other magazine was able to create such a fanatical loyalty in me. Sure others did for a time, but particularly with the photography magazines I was also an avid reader of in the same period of time Byte was published, I discovered quickly that after two years all the articles started looking familiar. With Byte it was always something new, perhaps because the industry it covered was always so dynamic and changing.

Byte was a part of my life for a very long time, started my writing career and aided my parallel career in computer science. I miss it.