Produced by DAZ Productions and written by the company’s president, Dan
Farr, “Mr. Finnegan’s Giving Chest” is a beautifully illustrated and
inspirational Christmas story about the joy of giving. Dick Van Dyke
portrays Mr. Finnegan, a kind-hearted toymaker who helps a young girl
understand the true meaning of Christmas. “Mr. Finnegan’s Giving Chest”
is available now through DAZ Productions’ website (www.givingchest.com) and will be available in stores Nov. 15, 2005. 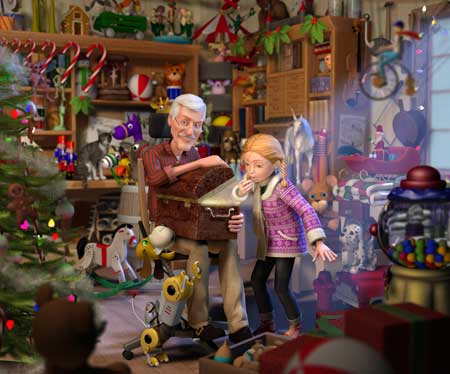 “One of my favorite hobbies is creating computer generated art and
imagery, which is why I was thrilled to be characterized as Mr.
Finnegan,” said Dick Van Dyke. “I’m a big fan of DAZ Productions and
was absolutely amazed with the illustrations they were able to create
with DAZ|Studio.”

Throughout the process, DAZ Productions used DAZ|Studio to create all
the illustrations for the book. Based on early pencil sketches, initial
scenes were laid out in DAZ|Studio with content gathered from DAZ
Productions’ online store – a virtual shopping mall of 3D models and
accessories. These initial composites were then improved in
DAZ|Studio’s real-time environment, where lighting, cameras, poses and
other elements were continuously refined. With assistance from NVIDIA,
DAZ Productions used OpenGL to interact with the large scenes in real
time and produce many of its test renders in a matter of only seconds,
saving them a substantial amount of production time. Final renders were
produced using 3Delight, DAZ|Studio’s software renderer option. 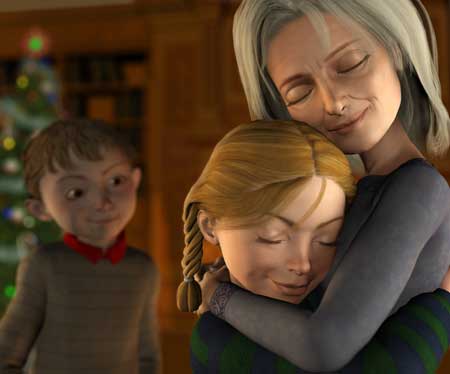 “With a powerful feature set and virtually no learning curve,
DAZ|Studio proved to be the perfect application for creating the
illustrations in ‘Mr. Finnegan’s Giving Chest’,” said Dan Farr,
president of DAZ Productions. “We simply could not have created artwork
of this quality, under such a tight deadline, using any other 3D
graphics design package.”

DAZ|Studio is free of charge and is available on Windows 98® SE or
higher and Mac® OSX 10.3 or higher. DAZ|Studio comes with three
pre-configured 3D scenes, including the popular Victoria model created
by DAZ, an extensive user manual, and easy-to-follow tutorials for
getting started. To obtain a free copy of DAZ|Studio, users register
for a free account on the DAZ website and agree to participate in the
company’s unique Tell-Ware program, which requires each DAZ|Studio user
to tell at least two friends about DAZ|Studio and/or the DAZ website.

Founded in 2000, DAZ Productions Inc., located in Draper, Utah, is a
market leader in 3D software and digital content creation. The
company’s model library is renowned for high-quality 3D content at the
industry’s most competitive prices. DAZ also develops powerful software
applications that support its content, including Mimic(TM), a lip-synching
application, and Bryce®, a 3D environment package. DAZ|Studio, the
company’s first free 3D figure posing and animation software package,
demonstrates the company’s commitment to expand and grow the 3D
marketplace by offering free software and 3D content at affordable
prices. DAZ’s products have been used in many professional productions,
television shows and print publications such as “X-Men 2,” “Spiderman,”
“Average Joe,” “48 Hours,” The Wall Street Journal, Popular Science,
and the History Channel. For more information, please visit the
company’s website at www.daz3d.com.