Mark returns with a new photography tip.
If you’re reading this, there is a good chance you’re in love.  In love with photography.  Like any relationship, an interest in making photographs starts out innocently, but has the potential to develop into something special.  Special to the degree that actually enriches your life.  I see this in the faces of those I teach, their enthusiasm bubbling over.  Some people tell me they get the same vibes from me, if you can believe that.  ; )

Early on we’re obsessed with technical mastery, thinking the secret to great photographs is which lens, f stop, or shutter speed to use, or in finding the ultimate manufacturer.  Some people never move beyond this phase of the relationship, changing cameras and lenses as often as their bank balance will allow, sure that success is only a matter of the right glass or latest camera body.  Sounds a lot like how some people approach marriage, except the middleman is at the camera store, not a law firm, and you look forward to seeing them!

With persistence, some degree of technical mastery is achieved and novice status falls by the wayside.  What follows are years of exploration, a learning process unique for each person.  Layer upon layer of expertise form a foundation resulting in the ability to capture images in almost any situation.  A rare paradigm shift such as the digital revolution may require reinvestment of time to regain technical expertise, but for the most part taking “good” photographs becomes “easy”.

You’ve learned that you can make sharp, well exposed pictures with almost any contemporary camera, and are confident in that fact.  But having gained momentum and made progress with your photography, you suddenly find yourself seemingly without direction, feeling a little lost.  This is the point at which I get an email from many photographers, and the catch phrase is amazingly consistent.  “I want to take my work to the next level.  How do I get there?”

“How do I get there?” is not the real question.  What’s really being asked, and what must be answered uniquely for each individual is, “What is the next level?”  What do you want to do with your work?  Once you understand your destination, planning the trip becomes doable, although doable does not mean easy.  Nevertheless, identifying some goal is the most important first step.  Without your sights set on a defined target, any energy you expend “reaching for the next level” is wasted in a random search, walking down a new path blindfolded.  The odds of success are small, and of finding a greater degree of satisfaction with your work equally unlikely.

For those of you who are saying, “That’s me, I want to get to the next level!”, here is my advice.  Decide to do something, and do it.  That sounds nebulous, I admit.  But I am dead serious.  Making a decision to try something different, and then following through will get you to a new place with your photography.  It may or may not be closer to the next level you ideally had in mind, but the perspective you will gain will be invaluable.  Never done flash photography?  Buy a flash and do it.  Never shot portraiture?  Ask a patient friend to sit as your subject?  Never done serious travel photography?  Go somewhere you’ve never been, by yourself, just to photograph.  Never taken a photo class or workshop?  Sign up.  Learning is essential to making a next level move.  You’ve done all these things, what then?  Ever had an exhibit?  Entered a photo contest?  Spoken to an audience about your work?  All these challenges will help you grow, and growing is how you move ahead.

Prior to 2004 (the first 35 years of my photographic experience) I NEVER made photographs of people.  Sure I took snapshots of family and occasionally friends, but I NEVER photographed someone I did not know.  After I sold my first photo to Nikon and realized “serious photography” might be in my future, I got the “How do I get to the next level” jitters in a big way.  So I decided, serious photographers can do people.  You need to learn how.  I found a workshop on street portraiture, how to photograph a stranger on the spur of the moment, took a leap of faith and signed up.  I won’t lie.  It was stressful, but it MADE me grow.  Now my work regularly includes people.  It has helped my professional sales, and I find myself connecting with humanity on a much more personal level. 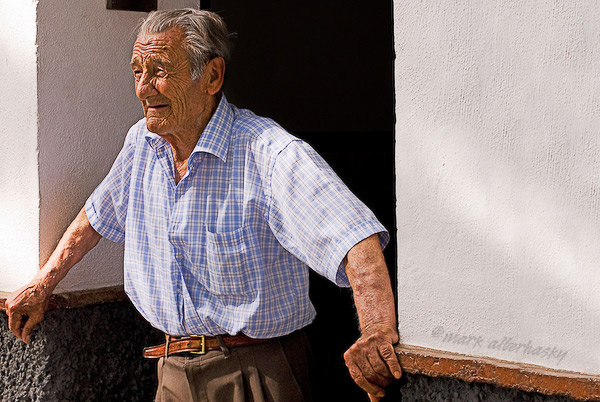 During the summer of 2006 I was traveling in Spain.  One afternoon my wanderings found me in a hilltop district overlooking the city of Granada.  The small village atmosphere was compelling, and then I saw a man in a doorway.  He was a classic figure, weathered skin and dark tan that said, “there is a lifetime of interesting experience behind these wrinkles.”   It was a challenge to gain his confidence and cooperation to make the portrait.  He was timid about being photographed and there was a language barrier.  But the portrait was lovely.  I went back the next day and showed him and his daughter the image on my storage device LCD.  They were impressed, and even signed a release.  But when I got back to the States and decided to send them a print, I realized I couldn’t read their European writing style.  It was a dead end.

Fast forward two years.  This summer, 2008.  I got an email from a fellow photographer I first met in 2004, during the street portraiture workshop.  She was sharing the details of her upcoming trip to Spain, with Granada on her itinerary.  I went online and found a map of the hilltop district where I had made my photo, and even identified the specific plaza.  I asked my friend, would she take a small print and try to find the man?  She said yes.

Imagine my satisfaction when I heard from her.  “I found the plaza and walked up to a small restaurant, showing the photo to a waitress and asking for help finding him.”  “Es mi papa!,” the waitress exclaimed, amazed to see the photo taken two years earlier.  My friend became an honored guest for lunch and her quest on my behalf became its own mini-adventure.

What are the odds someone I would meet in the portrait workshop would help me deliver a portrait half way round the world 4 years later?  What are the odds that taking that workshop would turn out to be a “next level” event?  You never know up front what the correct “next level” decision will be, or where having made that decision will lead you.  But if you’re serious about progress, making almost any decision and following through is a great place to start.