The GigaPan Epic is designed for small, compact digital point and shoot cameras. Yet a half hours work with some aluminum, a drill and a thread-tapping device will remove many of the limitations and allow you to take panoramas with larger cameras, including dSLRs.

The GigaPan Epic is constrained in the size of camera you can use it with primarily by the non-adjustable distance between the tripod screw used to attach the camera and the unit used to trigger the camera shutter. The more expensive Epic 100 partly overcomes this by allowing the tripod screw to be moved forward or backward to accommodate a greater range of camera thicknesses. The main issue is the thickness of any hand hold grip on the right of the camera. The Epic and the Epic 100 are both limited with regard to the height of the camera lens above the attachment point, so that the lens axis can be aligned with the vertical rotation axis, and the height of the shutter button above the base.

Overcoming the thickness of the camera has a very easy solution, find a way to move the tripod screw that you mount the camera to backwards.  My solution was to get a piece of aluminum 5 or 6mm thick, about 50mm wide and somewhere between 50 and 100mm long. Small dSLRs, like the Canon 350D, 400D and such, only require that the camera attachment point be moved back a quite small distance. So for this I used a 50mm long piece of aluminum (aluminium in the UK, Australia and New Zealand). At one end I drilled a ¼ inch diameter hole through which I could pass a Whitworth screw and lock this into the tripod screw hole of the camera. Using a bolt with a small head allows the option of getting the camera very close to the existing tripod screw. At the other end of the aluminum I drilled two 13/64 inch holes and then used a ¼ inch tap to put a tripod screw thread into these holes. This allows me to attach the plate to the camera and then use whichever hole is necessary to attach the camera to the Epic.

So for a cost of about $3, assuming you already have the tools, you can get almost the equivalent of the Epic 100. I used only hand tools for this. I found a place that would cut the aluminum to size for me and had them send me two 50 x 50mm (2 x 2 inch roughly) and two 50 x 100mm (2 x 4 inch roughly) pieces, so I had plenty to work with. It was delivered the next day. I used a cordless electric drill to carefully drill the holes. I started with a metal punch and hammer to create the starting marks after marking up the mid-line and drill positions with a Sharpie pen. I then drilled small diameter starter holes in each position I marked, following this with the proper size holes. For the ones where I wanted to screw in a tripod thread I then used a tap by hand to cut the threads. This required just working slowly and carefully, backing it out at times to clear the little bits of metal and then working in through some more until I was all the way through the metal. I then gave a light file to remove any burrs from the backside of the holes, gave it a good wash and it was done.

The reason I also made the longer plate was to allow for better balancing and possibly correct nodal placement of a longer lens. From the specifications on the GigaPan website it seems that there is no difference between the Epic and the Epic 100 apart from the sliding tripod screw. The weights are so close that this seems the case. So both have the same limit of the weight of the camera/lens combination you can mount. This weight limit is probably due to two concerns: one being the ability of the somewhat flimsy camera platform to support a heavy camera on the projecting platform and the other is concern for the gears and motor strength. The first issue could have been solved by placing a second vertical shaft on the other side so that the camera platform was supported on both the left AND right of the camera. The concern for the motor strength and gears should be more a concern for unbalanced weight. The built in adjustment for nodal position can be used to partly balance the weight but can only cope so far, hence the longer adapter I made to move the camera a bit further back.

The combination of the built-in nodal point adjustment (more correctly called the entrance pupil or non-parallax point) that the Epic has with a mounting plate with a number of mounting holes should make it easy to either balance the camera/lens combination or place the rotation axis in the correct place. Getting this rotation axis point correct is much less of an issue if your subject matter is not close to the camera. For me, shooting landscapes, it is thus much less of an issue and I am more concerned about balancing the weight and dealing with wind loading. Someone shooting interiors will be more concerned with the correct non-parallax alignment so that near objects do not more relative to far objects between shots, making successful stitching much more likely. 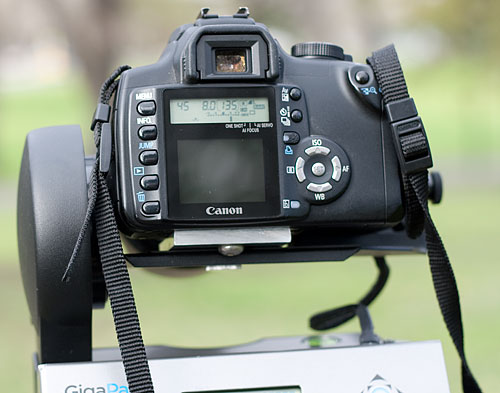 Thanks to reader Dave Belcher who has disassembled his two units, we know that the gears are plastic and these gears have significant slack in them, causing issues for long exposure photography. Given the price that the Epic is, this is not an unreasonable form of construction, but does mean that we need to be careful with the unbalanced weight (as well as the total weight) we put on the unit. As we know from astronomy, some unbalanced weight is beneficial in such a situation by taking up the slack in the gears but too much will cause accelerated wear on the plastic gears, so your unit is in your hands.

There are some other issues to address. An obvious thing to do is to mount a quick release base on your adapter and a plate on your camera to make setup and takedown much easier. The problem is that even a fairly thin quick release mechanism will raise the central axis of the lens higher than the Epic and Epic 100 can cope with. The adjustment for lens height lowers the camera plate towards the base. With the adapter in place you will have an overhang at the back that will catch the base if the camera is swung up to shoot overhead or nearly so. You can partly work around this limitation by, instead of leveling the base, tilting it up some so that the lens clears the front when depressed as low as you need and the back clears the rear when tilted up as far as you need. The Epic 100 Seems to accommodate more distance on the vertical axis, so it should be a little better.

Using a quick release plate or a camera with a power adapter on its base will also raise the shutter release higher than the unit can cope with. There are a couple of ways around this. One is to make a similar adapter plate for the shutter unit that allows you to raise the unit higher than it is designed to. The other is to remove the shutter unit and pate it to the base in such a way that it can trigger a cable release rather than the camera’s shutter button. This can also reduce some of the movement in the system when taking night shots.

As an aside, the best way to overcome movement issues in night shots is to use the self-timer in the camera and add this time into the time per image you can set the Epic to use. This should let all vibration stop before the shot is actually taken.