I had spoken to Henry previously, at a Hewlett Packard event over in
Singapore (see a separate story) but this was a great opportunity to
talk to him one-on-one for some two and a half to three hours. Henry
strikes you, up front, as an on the level sort of guy. He speaks well
and can be hard to shut up when you get him going on something he is
passionate about. Clearly honest and open testing and rating of image
permanence is one of these. 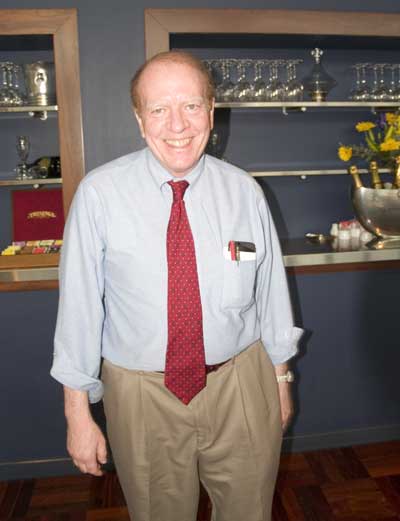 Many have criticized his work because the WIR is funded from the
companies whose products he tests. In answer to this Henry is clear
that WIR develops a standard test and that companies that contract them
to do testing have NO say over the testing method. In fact WIR’s
contracts with these companies make it clear that WIR can publish the
permanence performance of any product that is in the marketplace. This
last part is important as WIR does get called in by companies to help
in the development stages. Also WIR funds some testing themselves,
either because a key manufacturer prefers to do their own less rigorous
testing or because WIR deem a particular product category to be very
important. A recent example of this is their testing of 4 x 6 inch
photo printer display permanence (both digital and photographic). See 4×6 test.

Then we got into issues of their testing procedures. I had asked Henry
in Singapore about how he calibrates accelerated tests to real time.
Here we got a chance to get into the question in more detail. All WIR
(and other people’s) permanence testing is done using an accelerated
testing procedure. It is obvious that we can’t wait 100 years to find
out how long a print will last. WIR has specified a viewing environment
in terms of light levels, etc. They test using much stronger
illumination to have any fading visible in a shorter time. The issue is
one of reciprocity failure, something all photographers should know.
Reciprocity failure touches on one of the fundamental photographic
principles. In photography an exposure is determined by two things:
light level (aperture) and shutter speed (or duration of exposure).
They are supposed to be linked, so that if you double the light level
and half the exposure time (or visa versa) you get the same exposure.
For conventional photographic film this holds true across a wide range
of light levels and shutter speeds. However it is known to break down
at both very short and very long exposures. People doing
astrophotography (how I got into photography) and high speed flash
photography see this as a need to compensate with more exposure than
you would expect.

WIR address reciprocity failure and other issues by using the lowest
possible accelerated light intensity (lower than anyone else uses).
This means their tests take longer. They have also gone to great
lengths to calibrate their tests. They have been lucky enough to find
well documented examples of photographs displayed in known
circumstances for known periods of time and then have tested the same
materials under WIR’s testing procedure. This has allowed a good degree
of confidence to be built up at WIR that their accelerated years
ratings are close to the real number of years that could be expected.
However they are continuing to work on refining this. I also asked why
they used a years figure rather than a numeric or star rating system.
Henry feels such a system is just too complex for the average consumer
and also that, as materials get better, it becomes harder to show
differences in materials that are getting closer together in terms of
performance.

There is also some controversy about the light source used in these
accelerated tests. WIR uses fluorescent tubes. Henry acknowledges that
there are some issues with fluorescents, but not because of the
emission peak quality of their light emission. Rather it is because
they have significantly different spectral characteristics at the blue
end of the spectrum. WIR still considers them best though because of
the heat issue. Alternatives, like Xenon, create a heat problem. Heat
lowers moisture  which has a major effect on image longevity. WIR
is testing Xenon but have not been able to adequately solve the heat
issue, plus Xenon has higher UV than they would like. They are also
testing other daylight simulants.

WIR not only test inkjet printing methods but also conventional
photographic ones, though they limit themselves to four color silver
halide processes. They do not test film now as Henry observes that it
is on the way out as a mainstream capture method. Besides, he also
finds inkjet the most interesting area at present. Fuji’s Crystal
Archive paper is currently the highest rating silver halide color paper
at a 40 year display life. I asked Henry if the printing method
affected display life, as in whether there was a difference for prints
done on that paper in a Noritsu or Frontier digital photo printer. In
Henry’s tests there are no differences in longevity caused by the
printer chosen. The quality of processing can obviously have an impact.

WIR is doing some testing of third-party papers and inks. One problem
is that the third party people will typically not pay for testing as
they have no real interest in accurate longevity tests. So the testing
that they are doing they are funding themselves. The major problem with
doing any of this in a systematic way are the number of permutations
when you add third party papers, say, with even the variations in ink
from one manufacturer across their printer models. Henry has major
concerns about much of the third party product. For example, a new
brand of paper is on sale in the US under the National Geographic
brand. The packaging claims 100 year life for the prints ‘on any
printer’. Henry said that he knows that some of the printer models they
then list inside the packaging cannot achieve 100 years even on the
printer manufacturer’s best papers under WIR’s testing procedures, so
he remains concerned about such claims. The issue is that anyone can
come up with a testing criteria (and Henry is very critical of Kodak
for exactly this) but unless it is a reasonable one then the claims may
not bear much resemblance to what people will actually get.

A note here. Henry is also constantly evaluating their own test
criteria. WIR use a standardized light level that is meant to be
representative of typical display conditions. However, he notes that
light levels in houses have been steadily increasing due to the much
heavier use of glass and skylights letting more natural light in. This
may mean that at some point they will have to raise their standard
light level.

We then talked about artist’s materials and the interrelationship with
digital prints. He said that they had looked at the paint permanence
rating systems used by artist paint manufacturers to see if they could
cross-calibrate the two systems, but they found that the artist’s one
is quite loosely constrained because it is a
fairly old standard and
thus they couldn’t get them to cross relate. What he could say was that
in lots of old prints that have been retouched it is usually the
retouching material that has lasted better than the photographic color
print, suggesting that the artist’s materials are reasonabl
y ok. I
raised the issue of reactions occurring if one overworked a digital
print with artist’s material. Henry had seen nothing to suggest that
this occurred. Again he pointed out that the number of permutations
made systematic testing impossible. I also asked about framing
materials and buffered vs. non-buffered matt boards, for example. So
far he has seen nothing to suggest any issues with it and felt that
buffered matt boards were probably an advantage for long term
atmospheric exposure issues (which still happen in a framed print).

WIR is starting the testing of water-based coatings and also lamination
products, especially on canvas. They are limiting it to water-based
coatings mainly, because of a belief these are better for the
environment and the users, as long as they work well. Such coatings are
important not only from a surface protection perspective but also for
light filtering and protection from environmental gases, which can have
a major impact on unprotected prints.

Henry is involved with other people interested in true international standards covering inkjet prints and other mediums.

Henry made a particularly interesting point towards the end of our
lunch. Because there is often a difference in longevity from colour to
colour within an ink set, with the blacks often being the longest
lasting, he observed that the driver version being used, and the driver
settings, can have a major impact on print longevity. This is through
things like whether rich blacks or pure ink black is being used,
variation in the use of light ink colors, etc.

Henry was out in Australia to talk at a photo industry conference about
the new Epson 7800/9800 printers, whose prints he rates very highly for
both display and storage life. He has a lot of good things to say about
the Epson’s monochrome print life because the black inks use carbon
black pigments, about as long lasting as you can get. We’ll have more
to say about this in a separate article coming soon.

Both Henry and WIR are doing a great service to those of us who use digital prints.

That’s all we had time for over lunch but expect more in the future.