SONY GETS ON BOARD WITH PHOTOGRAPHY EXHIBITION ON SKATEBOARD DECKS 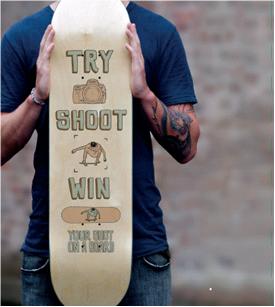 Tuesday, 10 April 2012 – Sony Australia is giving fans at the Billabong ‘City Squared’ invitational skateboard event the chance to see a uniquely urban photography exhibition.  Some of Melbourne’s top urban photographers, including Josh Robenstone and Luke Byrne, will be showcasing their work – not through traditional canvas – but on skateboard decks as part of the Sony Melbourne In Motion exhibition.

As part of the exhibition, fans at Billabong City Squared will have the chance to get involved and create their very own skateboard deck.  Sony’s range of Alpha interchangeable lens cameras will be available for loan throughout the event with members of the public given access to exclusive shooting platforms to put their photography skills to the test.  The top ten photographers on the day, judged by the Sony and Billabong teams, will have their winning shot transformed into a work of art on their very own skate deck.  To take part, all fans need to do is head to the Sony tent at the event, borrow a Sony camera and simply start shooting!

WHO: Australia’s best 40 street skateboarders plus a couple of international skateboarders take part in the Billabong City Squared Invitational